I have the VOUCHER

The ulpan trusted by:

Ulpan Integraliah has the best reviews among all ulpans in Tel Aviv and ulpans in Israel.

Михаил Востриков

Read More
Studied by skype for a year - went from only knowing the letters to being able to hold a conversation. It's been very fun too!

Samuel Jefroykin

Read More
Best oulpan in town, new method of theaching hebrew, out of the scope of classic oulpan. A must if you want to learn hebrew but also the israeli society and culture! I do recommend it.

Dasha Rosenberg

Read More
Once coming to this place, getting know people and your teachers - and there is absolutely no way back, you will love Hebrew and enjoy studying it. This is not only about grammar and reading, it’s something more: it’s culture, history, politics, modern language, sport and etc and etc! I do believe this is the best way and best place to study Hebrew and believe in yourself

Préciada AMOUYAL

Read More
I have just completed a professional ulpan at Integraliah. This training allows me to approach my job search on the Israeli market with more serenity. Alon, the teacher, was able to give me the vocabulary, the culture and the self-confidence that I was lacking in order to apply for a job.

Mario C

Read More
Does an other efficient method exist ? I’m impressed by myself and my ability to communicate in Hebrew. I learnt damn fast ! I took morning lessons and I’ve use what they taught me during live exercise in the market, in the street, in a restaurant ... with Israelis in Hebrew. It looks like a game, and it’s pretty funny though, but eventually it works. I highly recommend Integraliah if you want to learn fast, useful Hebrew with fun

Yael KRIEF

Read More
Competent teachers, a top-notch pedagogical follow-up and a dynamic team 🙂 it is always a pleasure to learn while having fun! I recommend without hesitation 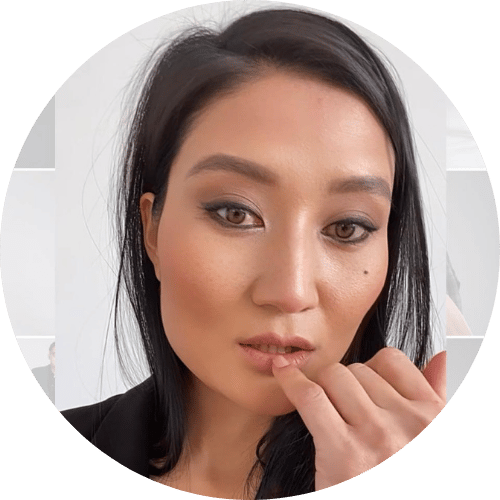 Altynay Tabysheva

Read More
Best and the most effective ulpan for everyone who learn hebrew. Ulpan is literally helping students to integrate to Israeli culture Friendly ambience and professional tutors/ managers, which are so nice and always taking care of their students. P.S. little expensive but it really worth it 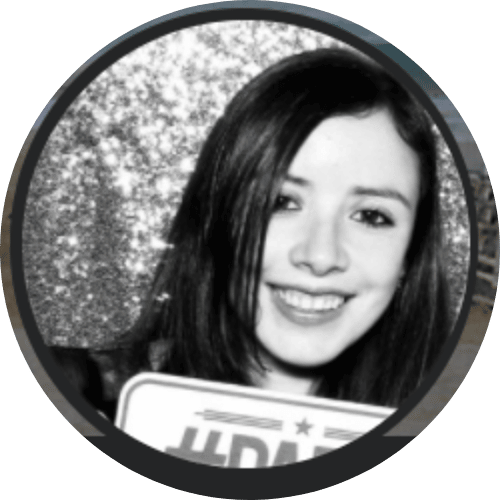 Rebeca Piña

Read More
Excellent Ulpan!! I learned and improved so much more in the past 5 weeks than in 10 months prior to Ulpan Integraliah. The classes are really fun and the teachers are great!

Toon Van Rompay

Read More
Slowly slowly, I'm getting to learn hebrew. It's only thanks to the patience of the teachers that I haven't given up yet, since I am one of the worst (read: most lazy) students alive. Yes, the only person to blame for the slowly part is me. And they have shown a lot of flexibility in keeping class going on during corona-times for those of us who dislike zoom-classes (keeping in mind any government lockdown that was going on). Yes, I would recommend them for sure!

Zacharie Lahmi

Read More
With a young and innovative approach, this Ulpan is perfect for people who are not interested only in learning Hebrew, but also learn Israeli culture. For me it was important to enter in the Israeli society, and Integraliah helps you do just that.

Gary collants-lauve

Read More
An easy and quick method to learn the Hebrew you really use in your day to day life. I am now able to communicate and work with Israelis in Hebrew. With Integraliah you learnt and you put directly in situation, in the streets, with people ... this method is strong enforcement. Very good and useful experience

Ever wanted to negotiate prices at the shuk, watch Israeli TV shows and understand what your Israeli co-workers are saying? At Ulpan Integraliah, you’ll learn Hebrew in a fun, dynamic and practical way while connecting to the uniquely amazing Israeli society and culture.

Every week, find out a new interesting podcast to learn Hebrew, whatever your level. Hebrew and Israeli culture will no longer hold any secrets for you.

Stay up to date with all the cultural news in israel, israeli series, israeli songs, israeli food and much more. 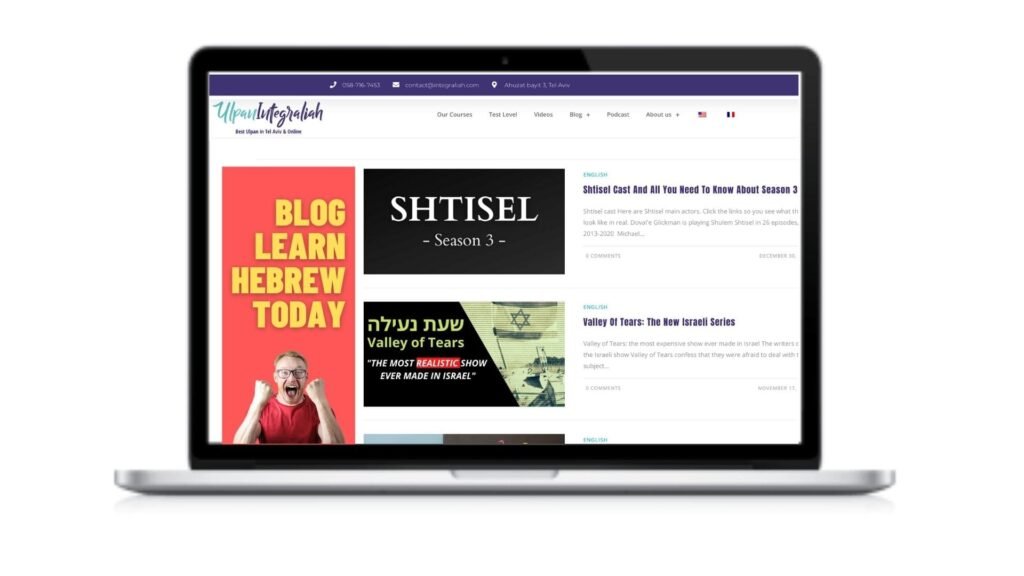 Learn Hebrew for free and from home with ulpan integraliah’s videos. 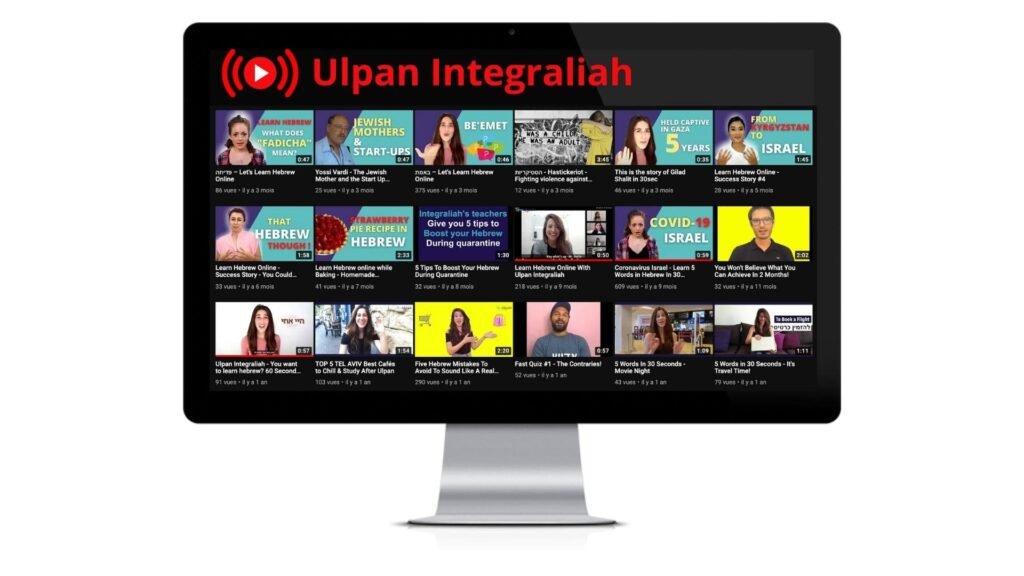 Ulpan Tel Aviv - Ulpan Near me

How to start learning hebrew with Ulpan Integraliah?

Ulpan in modern Hebrew means studio. Ulpan is the word also used for hebrew schools. In Ulpan you learn to read Hebrew .
Ulpan is also used to learn Hebrew for beginners , conversational Hebrew , learn Hebrew words, practice reading Hebrew .If you type Ulpan Tel Aviv, Ulpan Tel Aviv Telaviv , Ulpan near me , Hebrew class, Hebrew class near me , Ulpan online Online or Learn Hebrew on the search engines, you will probably find Ulpan Integraliah. This Ulpan – Hebrew class – is located in Tel Aviv in the Rothschild neighborhood (south of Tel Aviv). The Hebrew courses are given in Tel Aviv classrooms but you can also learn Hebrew from home, thanks to the online Hebrew courses. Online Hebrew courses are for all levels of Hebrew, i.e. Hebrew for beginners, Hebrew lessons intermediate level or Hebrew advanced level.

Ulpan means a study class for learning Hebrew (not literally as explained in the previous paragraph). The ulpan integraliah is open all the  year long. There are morning and evening classes, and Hebrew classes are held throughout the year. Ulpan Integraliah provides students with the tools to improve their Hebrew level wherever you want, whenever you want. For example, we produce a series of podcasts in Hebrew for all levels that deal with a real-life situation at each episode. With these free Hebrew podcasts you can learn conversational Hebrew, Hebrew expressions, everyday situations in Israel, etc. Ulpan Integraliah also offers a blog to understand Israeli culture. In our blog you will find guides to learn Hebrew, recipes of Israeli cuisine, articles about Israeli series, Israeli news in English etc. Ulpan integraliah also has a video channel to understand together words and expressions in Hebrew or to know the Israeli culture and personalities.

There are a number of ways to learn Hebrew.Ulpan integraliah has a unique, effective and proven Hebrew learning method that has been in use for almost 10 years. We have 100% positive feedback from our students, you can read testimonials, facebook reviews, google reviews or simply ask around.

To learn more about our ulpan in Tel Aviv or online, you can call us / send us a Whatsapp message at 058-716-7453 , send us an email at contact@integraliah.com , pass by at Ahuzat bayit 3, Tel Aviv or fill out the contact form above on this web page.

What is Hebrew language and Hebrew Alphabet?

Hebrew (in modern Hebrew ivrit) is a Shamitic-Semitic language belonging to the north-central branch of the Semitic language family of the Canaanite group. It is closely related to Phoenician and Aramaic languages as well as to Arabic.

Hebrew is the language of the Hebrew Bible (תַּנַ”ךְ / tanakh) and the Mishnah; that of most apocryphal books (ספרים חיצוניים / sefarim hiśoniyim) is Aramaic. The Qumran Scrolls (ספרים גנוזות / sefarim genuzot) discovered in caves north of the Dead Sea between 1947 and 1956, are also written primarily in Hebrew. Apart from copies of biblical books, only one manuscript in six was written in Aramaic (some manuscripts were also composed in Greek).

In the Bible, especially in the first book, Genesis , in chapter 14, verse 13, we find אברם העברי / Abram ha-‘ibri, it is “Abram the Hebrew” before he became Abraham (אַבְרָהָם / Abraham), but the text makes no mention of the language spoken by him and his descendants. It is generally accepted that the term “Hebrew” would come from the expression “מעבר לנהר / me-‘eber la-nahar” (across the river), which refers to the origin of Abraham.

The text of the Hebrew Bible in use in printed editions or in the Torah scrolls in the synagogue is called the “massoretic” text (מסורת / massoret, meaning “transmission”). Its writing is the result of several centuries of work, from the time of the kings (vii century BC) to that of the Maccabees (book of Daniel, 167 BC), whose different stages are difficult to establish.

Biblical Hebrew is a religious language, probably different from the language spoken by the population. Indeed, it contains mainly terms that can be used in a religious context. The Bible contains no more than 8,000 words, of which 2,000 are hapax (words that appear only once), and these words are built on only 500 Hebrew roots. By comparison, at the same time, the Greek lexicon contained 120,000 words. A more diverse popular vocabulary, now extinct, must have existed alongside the formalist and specialized language of the Bible.

From the tenth century onwards, it was outside Palestine, in the midst of the various Jewish communities of the diaspora (גלות / galut) that Hebrew survived, until its remarkable revival in Israel in the twentieth century following the efforts of Eliezer Ben-Yehoudah.

In everyday life, Jews spoke the language of the country in which they lived, reserving the Hebrew language for the cultural domain. It was in this language that the Jews of the Diaspora prayed three times a day, read the Torah and studied its commentaries. It was also in Hebrew that sages (חכמים / hakhamim) from different countries corresponded. Hebrew production in cultic, cultural and professional fields show the dynamics of the Hebrew language over the long historical period.

The Hebrew language is written from right to left with an alphabet of twenty-two letters. Originally, they denoted only consonants, but V ו, Y י and H ה are also used to represent certain long vowels and end-of-word vowels (V = /u/; Y = /i/; H = /a/, /o/ and /e/; V and Y were later used for /o/ and /e/, respectively) until at least the 10th century bc. B.C. and V and Y in the word interior until the 9th century. These auxiliary consonants, written to denote vowels, are also used in other Semitic languages, and are called nikud (dots).

In texts from Qumran and in later writings, letters were used more profusely to represent vowels. The complete system of vowel representation, adding dots to consonants, was developed much later, between the 5th and 10th centuries.

The present system of vowelization thus reproduces the current pronunciation of about a thousand years after the end of the biblical period, although it is undoubtedly based on early Bible reading traditions.

In the grammar it presents an approach to the syntax of European languages, as well as an important amount of lexical borrowings from these languages.

From the typological point of view, Hebrew is a synthetic language with a high degree of fusion. In terms of basic order, Hebrew uses prepositions, with a tendency to be core-initial. A morphosyntactic alignment of nominative-accusative type. 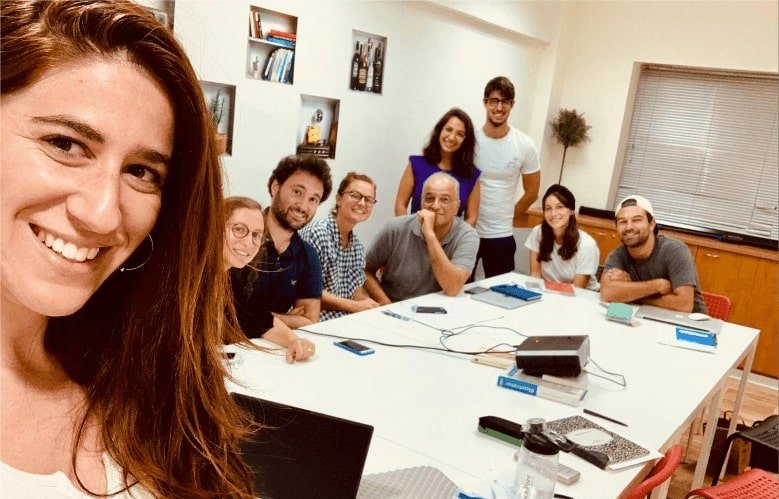